2020 has been an awful year for so many people and for so many reasons, for me this was compounded by having to do the hardest thing I have ever had to do, namely organising care for my 98-year-old gran.

My grandad was my hero and died far too young, but I think about him every day – I often hear him giving me a talking to in my ear when I am struggling with something. My Gran lived for my Grandad, he was her world and when he passed away 34 years ago my Gran told me she couldn’t carry on without him and me honestly I was really worried she wouldn’t, however, 34 years later I'm very proud to say my Gran is 98 years old and was very active until quite recently when she had a fall in the community, which really knocked her confidence.  When my Grandmother’s health started to decline further, I asked the family if I could look for suitable homecare companies to visit and take care of her.

Working in the sector for so long I already knew a lot of the providers in her area, sadly the one I would have chosen didn’t have an office in her hometown.  So, I started my search by asking other people on social media about their experiences, looking at CQC Ratings and I also looked at how long the Registered Manager had been in post.

I created a short-list and one by one I called the companies to find out more about them.  I had a lot of questions, and of course, some of those were about their recruitment methods for carers.  The final company I called, I had not heard of before, they were a family run home care provider. I was on the phone for over an hour and I got the full history of the company, why they were formed, and their values. They ran through most of the team with me too.

Another provider I called spent 15 minutes asking me questions and then gave me a reference number to say someone would call me back.  I got that call a month later, by then my gran's care had been started weeks ago. What did put me off though was my Gran was a reference number, not a person.

I chose the family-run company that had wonderful values and made me feel so at ease and we were not disappointed.  The only issue we had was we wanted more care for my gran, and they didn’t have the capacity.  I decided to offer them free advertising to help with their recruitment pipeline.

I found myself educating my family about certain aspects of Dementia.  Gran had stopped watching Television, had become reluctant to use any electricity, and had started moonlighting and having accidents around the house.  They felt she was almost being naughty, and they struggled to understand her behavior so I set about finding Dementia Cafes and local support groups so that they could learn more about Dementia.

Just as the COVID pandemic peaked Gran needed a lot more help and support, as the care she needed was having an enormous strain on my Uncle and his wife, who had also just found out she had cancer.  We found ourselves as a family having to move Gran to a Nursing Home at the worst possible time we could.

Due to our previous experience with my Aunty who was abused in a Nursing Home, I was passionate about choosing the Care Home and I don’t think I have ever interviewed a Registered Manager as thoroughly….. the poor lady!!!! anyway, she moved in and had to isolate for her first two weeks which was a very confusing time for her.

I am happy to say though, despite living on her own for the last 34 years, she absolutely loves it.  She has so many friends and all the Care Assistants know my Dad and constantly keep him updated on her progress.  All of them say “We love her” so I know she is in a great place.  The family has only managed to visit as Keith Lemon would say “Through the window” and here is a picture of her a few weeks ago. Sadly, I have not seen her since May for her 98th birthday.

Since moving into the Home my Gran has thrived, she has gained weight and is a lot happier person for making the move. 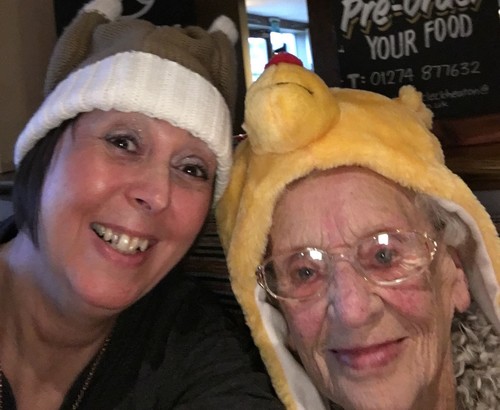